One year ago this week, Senator Scott Cyrway sounded the alarm that the CMP Corridor poses a major wildfire risk with this 2020 column. According to Senator Cyrway, he met with the Forest Service and CMP to discuss his concerns after his piece was published. The need for equipment, training and tote road access and off road fire fighting equipment was discussed, but unfortunately, “CMP has acted on none of the recommendations that were laid out in that meeting. It seems that the inherent risk associated with their for-profit line is not a priority for the company.”

Unfortunately, his fears were confirmed this past Memorial Day Weekend when a wildfire ignited along the newly-widened corridor in Concord Township.

First Featured Story of the Week

According to Bingham Fire Chief Scott Laweryson, the call to the vacant area came in around 3 p.m.

He says the Clean Energy Corridor was cutting trees down there a couple weeks ago, but no one had been there since.

Lawyerson says Northern Clearing, who was doing the work, assisted the Bingham Fire Department with its tanker.

Featured Column of the Week

From the State House: CMP Corridor a Fire Hazard

In the case of the Concord Township wildfire, we were incredibly lucky. The fire broke out in Segment 2, not far from the nearest volunteer fire station, and by the grace of God, Northern Clearing, the Wisconsin company that was hired to clear the Corridor, was still present in the area and was able to assist  the local fire department in extinguishing the flames.

This time we were lucky, but what happens next time when a wildfire breaks out in the most remote sections of the powerline? There is no emergency response capability in the first [approximately] 70 miles of CMP’s for-profit corridor, and the next 30 miles is serviced by only three volunteer fire departments with limited manpower to respond to a crisis. Once Northern Clearing packs up and returns home to Wisconsin, there will be nobody on the ground to help squelch the flames before a relatively minor powerline fire becomes a major wildfire event in some of the most remote and difficult to reach parts of western Maine.

As a retired first responder, I know just how quickly things can get out of hand. In the case of a fire, quick response time is key. That’s why I am particularly concerned about the obvious wildfire risk posed to Maine’s wilderness and rural communities by this unnecessary and unwanted CMP Corridor, and I’m not alone.

Take a look at the below map which hones in even more on the potential for uncontrolled fire along CMP's corridor. It is crazy to think that in the first approximately 70 miles from Quebec to Bingham, no organized fire departments are within two miles of the corridor.

The Maine House of Representatives voted on Wednesday to advance LD 194 by a vote of 76-55 with 20 members absent, more than enough to pass the measure, but unfortunately not enough to meet the ⅔ threshold required for the bill to take effect immediately. The bill is currently being held in the House before returning to the Senate for final enactment. If your state representative voted against LD 194 this week, or if they were one of the 20 absent members, please contact them TODAY and urge support of this important legislation to prevent foreign governments from spending money to influence the outcome of elections in Maine. Go here to view the Roll Call.

The bill — co-sponsored by Sen. Rick Bennett, R-Oxford, and Rep. Nicole Grohoski, D-Ellsworth — would outlaw companies with a foreign government ownership stake of greater than 10 percent from making contributions to ballot question committees or carrying out independent expenditures to support or oppose a referendum. It passed the House on Wednesday in a 76-55 vote.

It is the first high-profile bill on legislative floors in 2021 coming out of the contentious referendum campaign looking to stymie the CMP corridor project, which is currently under construction but faces legal challenges and a November referendum from opponents.

Representative Nicole Grohoski, a co-sponsor on the bipartisan measure, delivered this powerful floor speech in support of the bill.

Please join us in thanking Rep. Grohoski for her leadership on this important issue, as well as the other 75 representatives who voted to support LD 194.

In other news, Senator Chloe Maxmin (D-Lincoln) and Representative Jennifer Poirier (R-Skowhegan) recently joined together to send a bipartisan letter to Governor Janet Mills to urge her to allow the Maine voters - not CMP's construction equipment - decide the fate of the CMP Corridor project.

Activist of the Week

With these hot temps and powerline fires sparking around the state, we would like to honor Vicki Schmidt of Buckfield as our activist of the week. Vicki is a Maine State Fire Instructor and she serves on the Maine Fire Protection Services Commission on behalf of volunteer and on-call firefighters for the Maine Federation of Firefighters. She is also a volunteer firefighter for the Buckfield Fire Department. Vicki has been with us since the beginning and was instrumental in initiating the Maine State Federation of Firefighters' letter of concern "for fire and other emergency response capabilities within the areas located along and adjacent to the NECEC corridor." She continues to educate the public that along the first approximately 70 miles of the NECEC corridor route, from the Quebec border to Bingham, there is no organized fire response or emergency response capacity. This poses a critical risk for Maine's environment, and the health and safety of Mainers. She has also submitted testimony to regulatory agencies highlighting negative impacts on trout habitat waters.

We are so thankful for Vicki's contributions, and for all of our members who bring their professional expertise to help our cause.

This week, we are looking for volunteers who would like to help hand out signs, stickers and information at the Monmouth Fair! This fair runs for three days, and we will need to have two volunteers covering the table at all times. In recognition of your time, we will offer a stipend to volunteers who complete full shifts to offset the cost. If you would like to help, please fill out this form and Cara will be in touch! 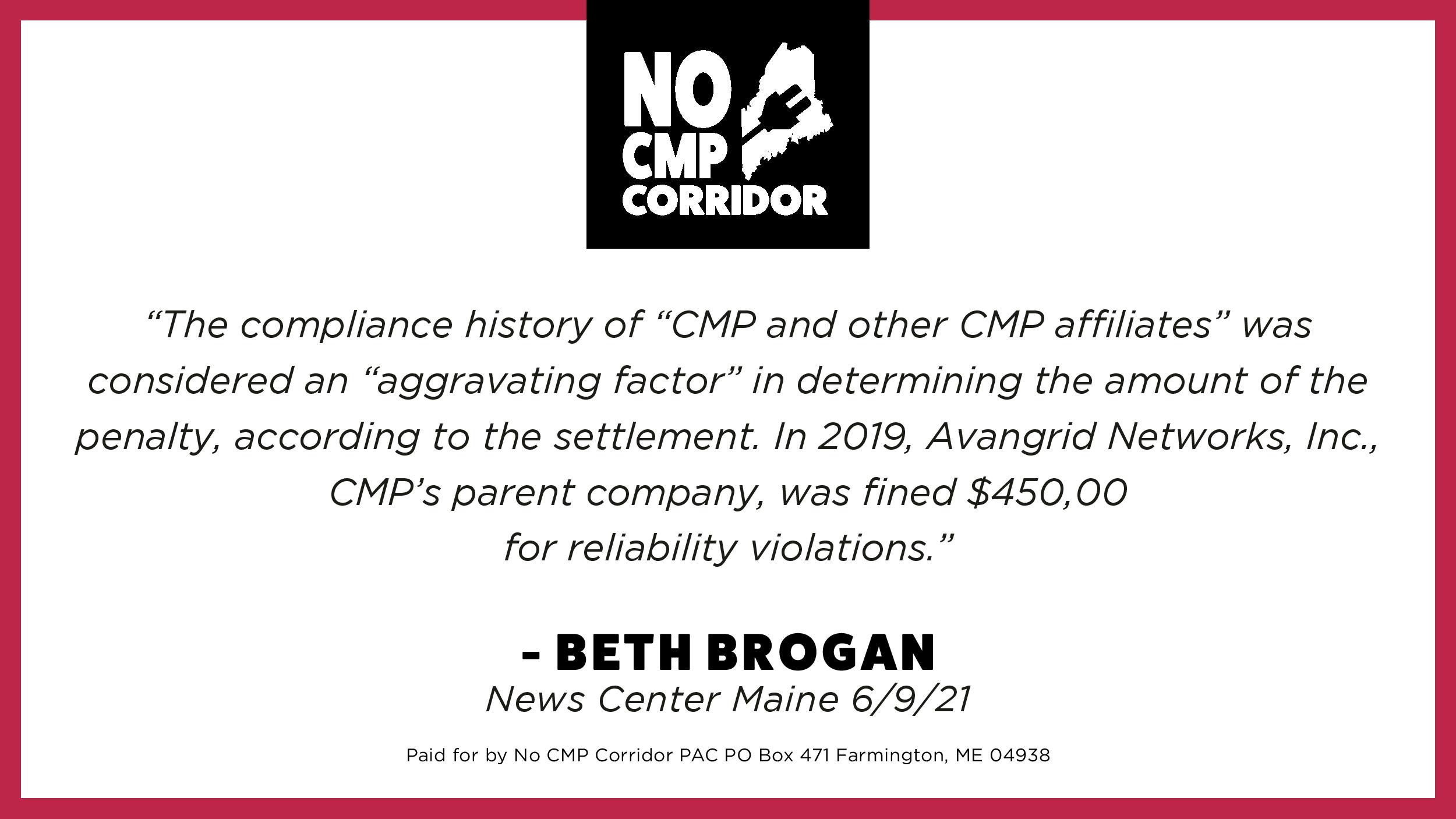 Finally, CMP made the news this week for being assessed yet another fine by federal regulators for failing to meet reliability standards two separate times. This is the second fine the company has been assessed by FERC in only two years. Perhaps CMP wouldn’t have so many issues if they weren't so distracted by promoting their unpopular for-profit corridor to deliver power to customers in another state.

That’s all for this week, folks. We hope to see you at the Monmouth Fair.

Donate to help our cause and we will send you a bumper sticker.