Today is the day that we celebrate our nation’s independence, and ironically, it’s also the day that I deliver some troubling news. This week, we were unable to overturn the unfortunate veto of a bill that would have protected our sovereignty, and the integrity of our elections. The motion failed by only two votes. Because of this, a dangerous loophole that allows foreign governments to electioneer in referendums initiated by the people of Maine continues to exist.

Despite a strong showing of supporters at the State House Wednesday morning, the veto of LD 194, "An Act To Prohibit Contributions, Expenditures and Participation by Foreign Government-owned Entities To Influence Referenda” was sustained. The bill is currently being held in the Maine Senate for potential reconsideration.

Here is the roll call. If your State Senator voted yes (Y), please thank them for having the courage to do what is right.

This vote was yet another shining example of why more than 80,000 Mainers from every corner of the state signed our petition to initiate a referendum this fall. LD 194 was a no-brainer, and despite receiving initial broad bipartisan support, it was unable to survive the governor's unfortunate veto.

Some lawmakers and bureaucrats have prioritized the interests of foreign corporations, and in this case FOREIGN GOVERNMENTS, for long enough. The people of Maine are rightfully angry, and this November, they will have the opportunity to vote YES to reject the CMP Corridor.

Maine is NOT an extension cord for Quebec to Massachusetts. 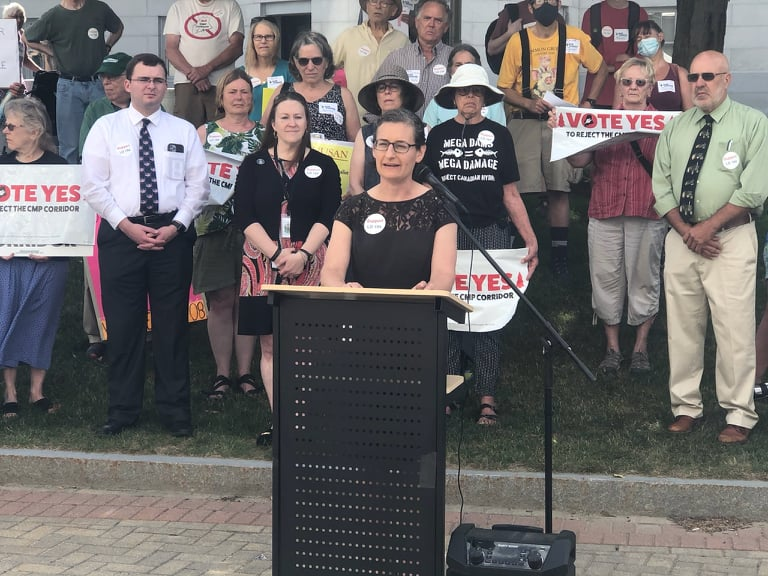 Featured Activists of the Week

This week, we’d like to thank our activists who participated in our LD 194 Day at the State House and our volunteers who reached out to state leaders by email or phone. We had a great turnout, and while the end was certainly not what we had hoped for, we stood together for what is right, and for that, we should all be very proud. Some volunteers traveled a great distance to support our cause, and we are so thankful for their passion and dedication.

Featured Column of the Week

Politics and Other Mistakes: French kiss-off
By Al Diamon

As Brochu correctly noted in her veiled remarks back in May, this is a commercial endeavor, in the sense that her company and her partner, Central Maine Power, stand to make billions of dollars. As with any commercial action, there’ll be winners – the power companies – and losers – everyone in Maine who doesn’t own stock in Hydro Quebec or CMP.

It is not, however, the way the political process works.

Polls show the power line is unpopular, with around 60% of respondents opposed to it. Without massive spending by Hydro Quebec, the project will almost certainly be rejected by the voters this fall.

Or as French-speaking CEOs are wont to say, l’argent est tout ce qui compte. C’est vraiment ce que je pense (money is all that matters. This is really what I think.)

Featured Story of the Week

Saviello returned to the show in early June to discuss the project. In an interview, he said the anti-corridor movement would take whatever help it can get. But he acknowledged the segment had been met with mixed reactions among people with different partisan affiliations.

“My son said to me, ‘Dad, you did a really good job, but I wish it was on another show besides Tucker Carlson,’” said Saviello, a former Republican state senator from Wilton.

It highlights the strange divisions the corridor has created in both major parties and Maine’s environmental community while uniting many otherwise at odds.

Featured Letter of the Week

Legislators Should Back Mainers on Power Corridor

By Chelsea Washburn of Durham

Our new (and improved!) signs have arrived! If you would like one, please fill out this form and we will be in touch! Signs are free, but as always, donations are very much appreciated.

That’s all for this week. I hope that you are all enjoying the holiday weekend. Happy birthday, America!

Thanks for your continued support! Together, WE WILL STOP THE CMP CORRIDOR!